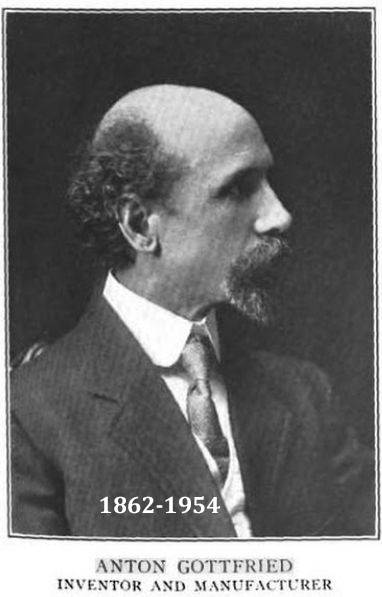 portrait: Photograph from an archival source: callahan, submitted by organ cow. Taken on 1930-01-01

A. Gottfried & Co. was established by Anton Gottfried in Philadelphia, Pennsylvania, in 1890, as a pipemaking firm. Henry Kugel was a partner in the firm from 1892 until 1911.1 The firm relocated to the A. B. Felgemaker factory in Erie, Pennsylvania, in 1895.2 The firm made entire pipe organs,3 rather than strictly pipes beginning around 1916, but was better known as a supplier of pipes;4 it was incorporated in 1920.5 The Gottfried firm also made pipes for the Hinners firm.6

Founder Anton Gottfried relocated to Charleston, South Carolina at some point after World War II; and established a new business there; he sold that concern to Standaart Organ Co. in 1948. He continued working for Standaart as a voicer.7 He retired from Standaart and moved to Daytona Beach, Florida. He died there in 1954 at age 93.8 The company that he founded in Erie either closed or was sold to former staff member Frederick Durst who changed the name. The National Organ Supply Co. was also formed by former employees of A. Gottfried & Co. and may have acquired some part of the business. Organ Supply Industries (OSI) lists all three companies as part of its heritage.9

This builder has been viewed 939 times.