Updated through online information from Scot Huntington.
When St. Casimir's Roman Catholic Church (Lithuanian) was closed in 2002 for conversion into upscale condominiums, the Hartford Diocese sold the organ to St. Francis Church in the nearby Fair Haven section of New Haven.
The organ was restored according to OHS Guidelines for Restoration by S.L. Huntington & Co. of Stonington, Connecticut and moved with the assistance of the Organ Clearing House. The organ acquisition and relocation was the capstone of a massive refurbishment of the St. Francis physical plant in celebration of the parish's 150th anniversary. The Hook replaced a small 1950s M.P. Moller unit organ at St. Francis, installed within a small circa 1860s case, which was relocated. The Hook was installed on a specially constructed raised platform designed to distribute the organ's weight over load-bearing beams, and the casework and large frame members which didn't return to the builder's shop for restoration were cleaned and polished in-situ by a large contingent of church members.
As originally designed, the organ interior was tight and difficult to service, a factor compounded by the installation of the organ against a back wall with the Pedal Diapason forming the rear of the instrument in its original home. With the new luxury of depth in the St. Francis gallery, the Diapason was moved back 18 inches with the resultant modification of the Diapason's action and winding, permitting a service passageway behind the organ at floor level, and with modification of the Swell box rear wall, a new walkboard for tuning and service was added behind the Swell division.
The slide tuners installed in 1969 were retained, and tonal "adjustments" to the pipework regulation and voicing which occurred over many years were reversed. The organ is stacked with the Swell above the Great, the Pedal 16' Diapason stands on its own chest standing at floor level across the rear of the instrument, and the remaining two pedal stops are divided diatonically on two chests, C and C-sharp, at the sides of the Great chest and at the same level.
The original facade pipe decoration was recreated by decorative arts specialist Marylou Davis with the assistance of church members. A new Zephyr blower installed at St. Casimir's by the Thompson-Allen company was retained in the new location, and located in a specially constructed room two floors below in the parish hall. With the exception of the bellows releathering, well done by Richard Hamar in 1968 and still in good condition, the remainder of the instrument was restored without any additional changes to the original fabric other than those mentioned above. Removed at the eleventh hour before the transfer of the old St. Casimir's to the new owners in June 2003, the restoration was completed in November, 2003. The instrument was dedicated in a gala concert by the church organist, Britt Wheeler, on January 10th, 2004, performing works of J.S. Bach, Mozart, Franck, Mendelssohn, and Guilmant.

Online update from Norbert Kelvin -- Whole organ thoroughly cleaned but not completely taken down. Swell Cornopean(?) required two (three?) new pipes which Richard and I made (with help from Yale University Engineering and Applied Science chemical engineering workshop). These pipes should bear markings showing they are not original. Tuning slides fitted to smaller metal flue pipes. Reservoir releathered. The organ was re-dedicated in late Jan 1969, being blessed by the then Pastor Rev. Albert Zanavicch, and I gave the re-dedicatory recital. About 2 years later the few remaining missing pipes of the Great twelfth, fifteenth and mixture were reinstated by Richard Hamar. When the Lithuanian Catholic congregation took over the church from Davenport Congregational, the organ was relocated from the front to the rear gallery by Hall(?) I recall being told that the organ was relocated in 1928. This needs to be confirmed from any diocesan records about the parish of St Casimir.

Source not recorded: Open In New Tab Stoplist from console, June, 2003
We received the most recent update for this stoplist from Database Manager on April 09, 2020. 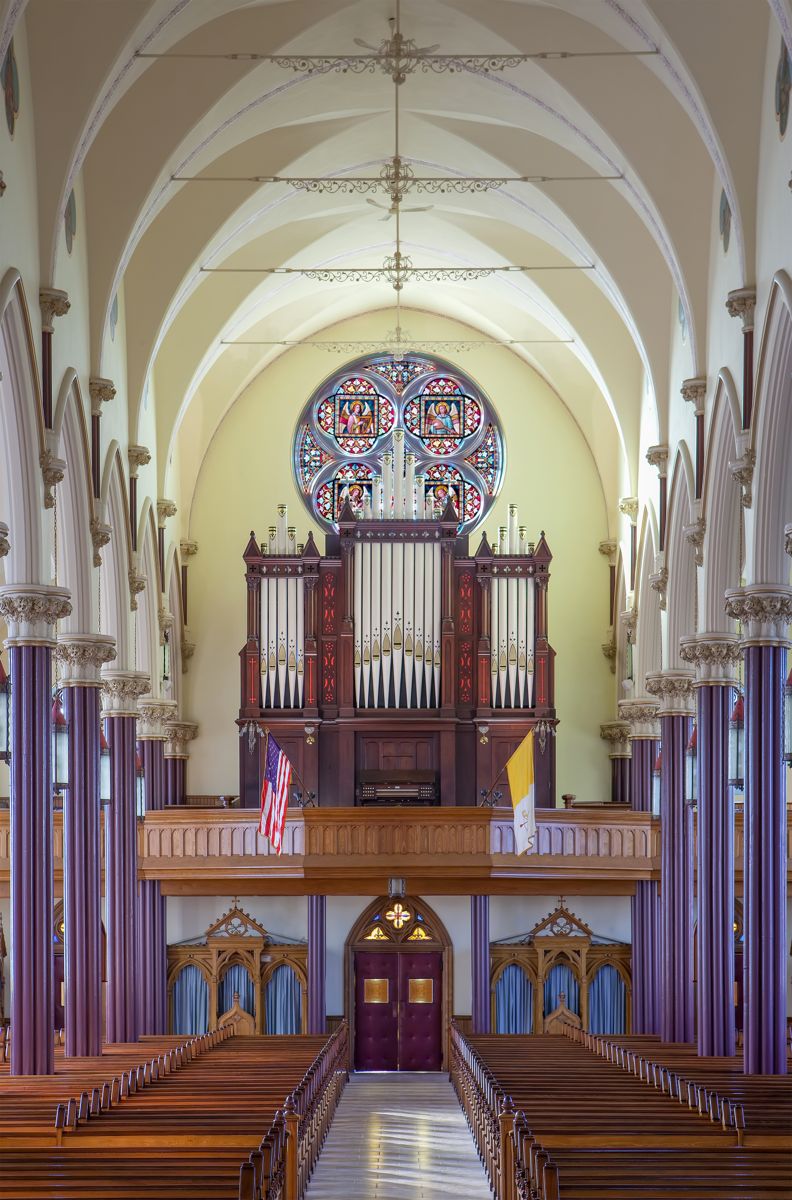 This instrument has been viewed 606 times.