We received the most recent update for this instrument's status from Scot Huntington on May 04, 2021.

All: We received the most recent update for this division from Scot Huntington on May 05, 2021.

Main: We received the most recent update for this console from Scot Huntington on May 04, 2021.

The organ was built by Michael Hartman Swinger of Carroll, OH in 1978 for his alma mater, Ohio State University (Columbus, OH) where it was installed in a chapel. In 1989, the building was being repurposed and the organ was no longer wanted. It was sold and removed by the Organ Clearing House: the crew composed of Alan Laufman, Dana Hull and Scot Huntington assisted by the builder. The organ was installed in Ashaway in the fall/winter lf 1989 by members of the congregation under the direction of the organist. The organ replaced a severely compromised custom three-manual Baldwin that was second hand when the church was built new in the late 1960s.

The builder read articles in the Organ Yearbook III, 1972 and Arte Musices about the two surviving instruments of the Salzburg-trained Croatian Ivan Juraj Eisl (1708-1780), and became intrigued. The two surviving instruments of Eisl are considered the most important historic instruments in northern Croatia. The organs are in monasteries close to the capitol city of Zagreb and the border with Austria. The pipe scales were provided for the two instruments, the largest being in the monastery of Marija Gorica (1759), upon which this instrument was closely copied.

All metal pipes were of tin, built by Stinkens, and supplied pre-voiced. No further voicing adjustments were made when the pipework was installed. The stopped 8' and open 4' wood ranks in the Brustwerk were built by Bozeman-Gibson, and the 12-note 16' extension of the HW Rohrflute were made by the builder. The lowest notes of the 8' Principal were metal Haskell basses placed inside, and could not be made to work so the builder removed the canisters and turned them into capped Bourdon pipes. The Pedal Fagott 8' would have been a raspy, snarly reed with wood resonators in the original organ, but here there was only a stopjamb preparation -- there were no windchest or action preparations for this stop. The Pedal 16' pipes were installed behind the organ where they became water damaged. While they were repaired in 1990, they had no tone in this A-acoustic and were eventually replaced by ca. 1925 Hall Organ Co. pipes from the Norwich Conn. Masonic Temple, installed by the organist and purchased from a local collector. Originally voiced on much higher pressure, they are soft and under-winded on 2 1/2". Lowering the cut-ups might help alleviate this problem. At some point after 1991, the organist removed the tierce pipes from the Sesquialtera and plugged the toe holes, turning this into a Quint 2 2/3'-- a pitch Eisl never made separately available in any of his instruments. The pipes have since been lost, and the tonal loss of this important chorus/solo sonority is to be greatly regretted.

SLH & Co. was hired in May 1990 to regulate the action and regulate the pipework to its new home prior to the dedication recital by Peter Sykes in June. In the partially carpeted A-frame acoustic of the Ashaway church, the out of regulation state of the pipework was glaringly apparent -- the windways and upper lips of the unnicked pipework had gone out of adjustment and were a contributing factor. The reference organs did not contain a 2' flute, and the organist and I were not happy with the way the 2' Principal worked in the BW Cornet ensemble, so the two 2-foot stops were exchanged, placing the 2' Principal on the HW as it was in all of Eisl's instruments where it forms the proper relationship between the 4' Octave and the Mixture. The bottom two octaves of the Mixture were slightly recomposed around the Principal 2', to copy that in the original organ rather than a supply-house version of a standard 3-rank mixture (Eisl used open unisons as the highest pitch in the bottom octave, with octave repetition, not open fifths, and no duplication of the 2' pitch). The stop labels were left as they were originally, so don't reflect the 2' exchange. While no cut-ups or the open-toed voicing style were changed, languid edges were filed as they would have been in the originals to control extraneous transient noises, and lips put back in alignment with loud and soft regulation of the pipework. The organ was placed in Kirnberger III temperament. The tonal exchanges and on-site tonal finishing were not sanctioned by the original builder.

This entry describes an original installation of a new pipe organ. Identified by James R. Stettner, using information from this web site: http://trinityashaway.org/photos-page1.html. --

Keydesk: Open In New Tab Originally published 2018-01-02
We received the most recent update for this stoplist from David Tonn on May 19, 2021. 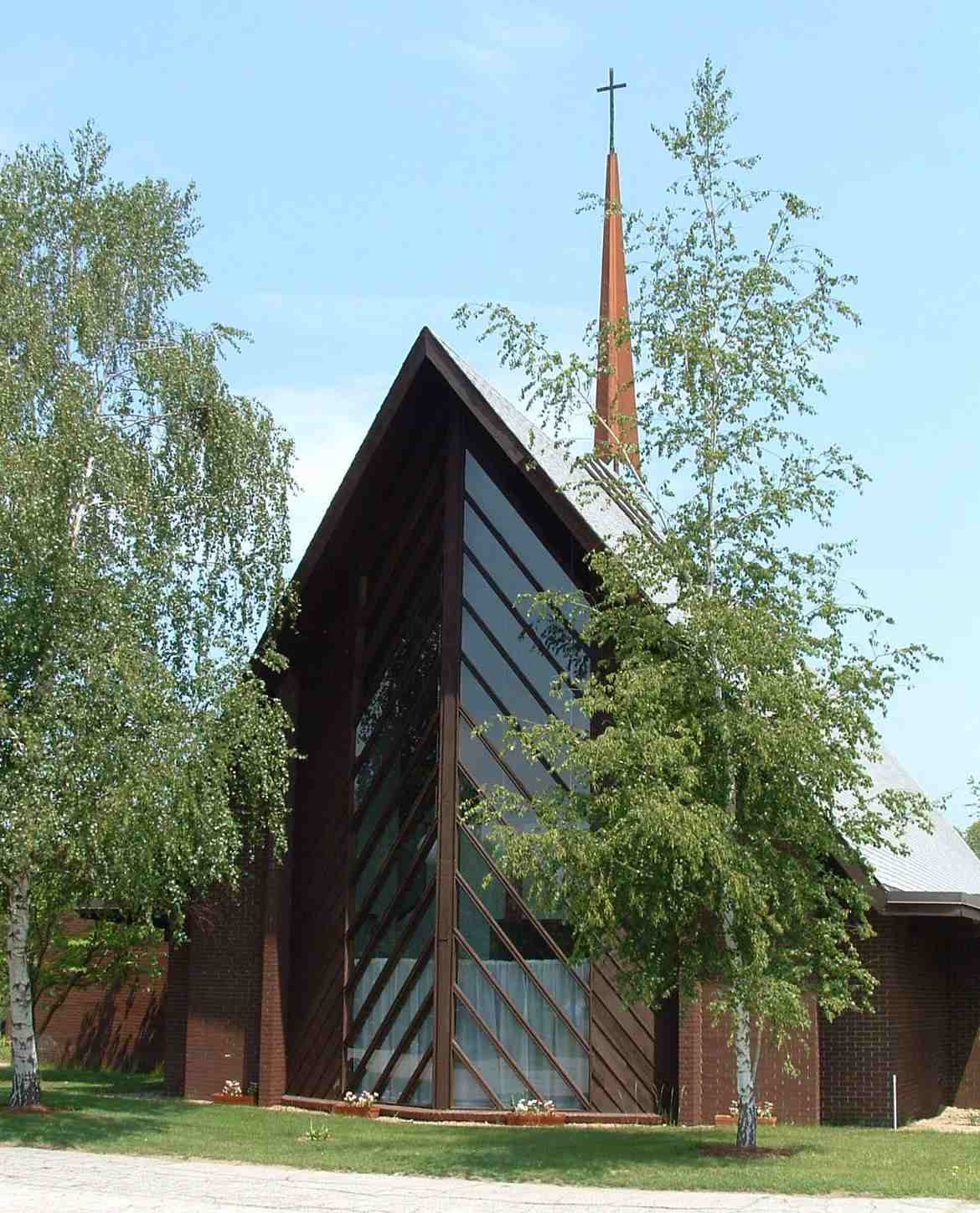 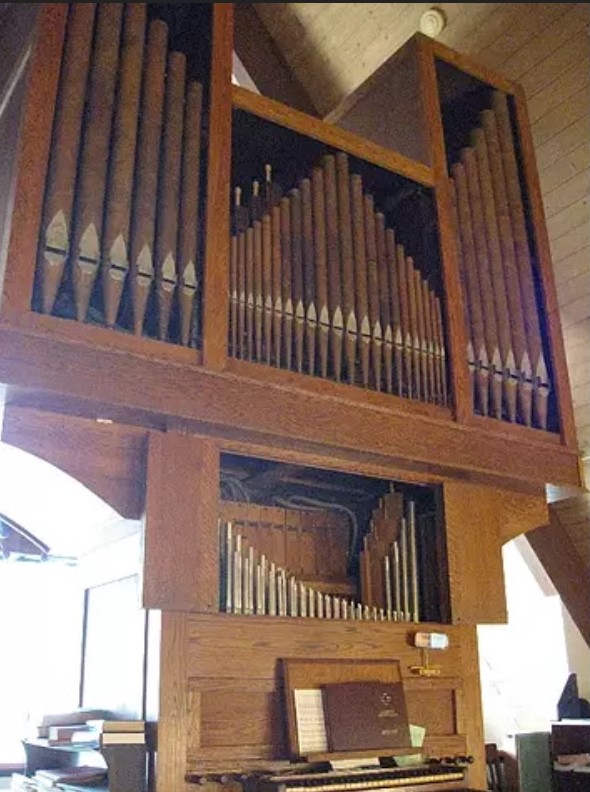 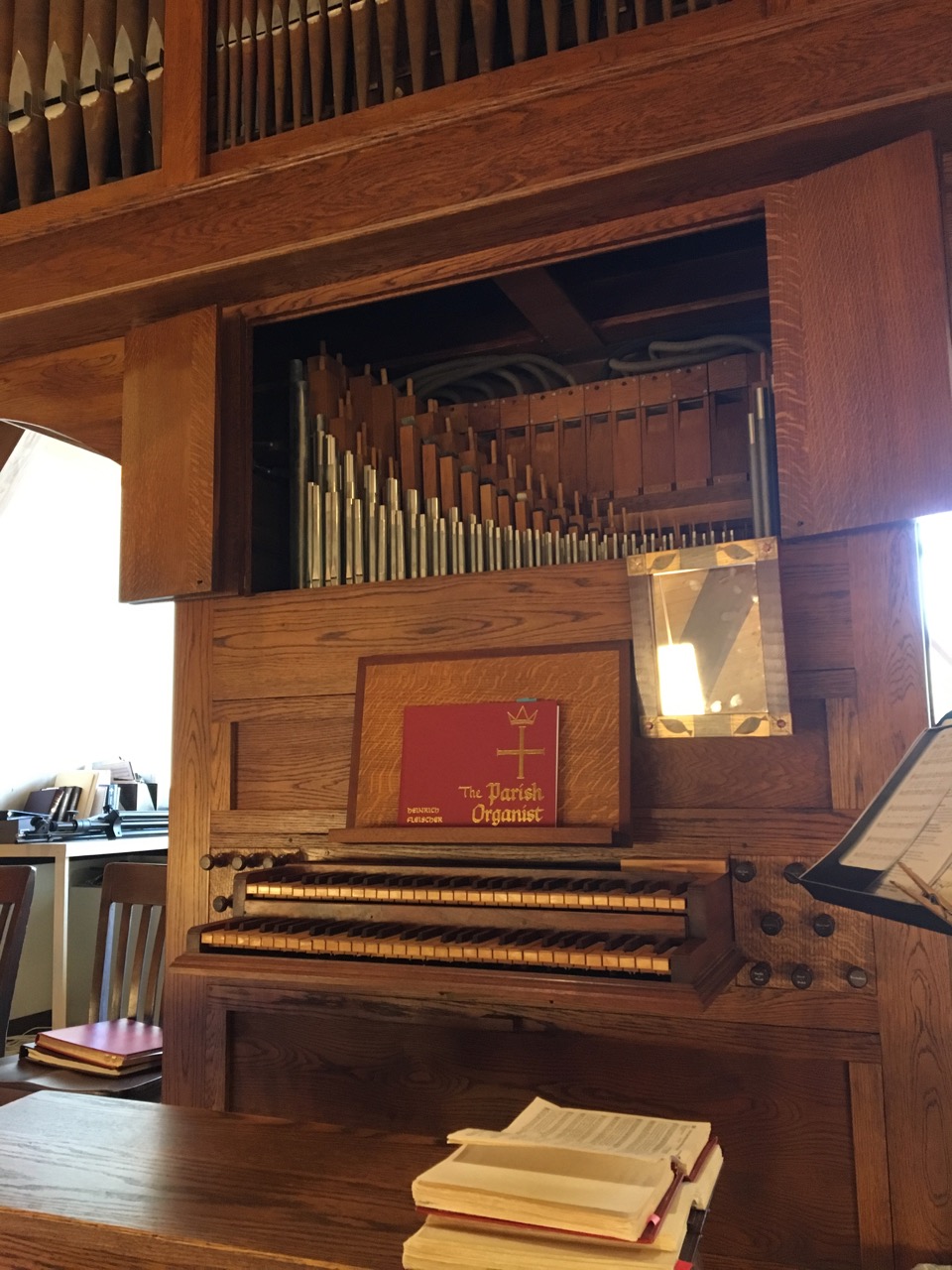 Keydesk with Positif division pipes above: Photograph by David Tonn. Taken on 2018-10-21

This instrument has been viewed 141 times.