We received the most recent update for this instrument's status from Database Manager on April 20, 2019.

All: We received the most recent update for this division from Database Manager on April 20, 2019.

Main: We received the most recent update for this console from Database Manager on April 20, 2019.

Updated by Scot Huntington, who has heard or played the organ. In addition Scot Huntington gave this as a source of information: Site inspection March 27, 2019.
Manual chests have 58 notes, keyboards have 61- top 3 note silent.
The church has no records relating to the present or any previous organ in the building, except the single reference in the 1959 history. While the case front is very likely a stock Hook case from the 1880s, the organ inside is definitely not Hook. Trying to reconcile the church\'s tradition of what they think the organ is supposed to be, and what is now inside the case, can\'t be rationalized in the absence of any supporting primary source documentation. What\'s known is Williams Laws Sr. installed what was believed to be E. & G.G. Hook & Hastings No. 1053, 1881, from First Unitarian, Waterville, Maine. (The present organ now in this chamber, pipes and chests, is larger than the Waterville Hook). It could be possible Laws did in fact install the Hook, without changes, at that time. The present case front could possibly be from that organ. Laws is again believed to have electrified this (or an) organ with his own version of an Austin stopkey console in the early 1940s. Rostron Kershaw again rebuilt that (or an) organ around 1957. The present organ\'s interior woodwork sports his signature battleship gray paint everywhere, and the pneumatic primaries for the pulldowns and the electro-mechanical switching equipment are also indicative of his standard procedures.

In order to fit in the present organ chamber/alcove, the organ structure has been turned 90 degrees, i.e. perpendicular to the facade. The facade is not wide enough to cover the organ, so wings have been added on each side. The manual chests and pipework are all of a piece, from one builder, as yet unknown. The pedal stops and manual basses are strewn about the chamber wherever they would fit. The original Swell Bourdon sits unenclosed on top of the Swell box on pneumatic unit chests and serves now as the Pedal Bourdon unit. A single large reservoir, perhaps part of whatever organ this is, has been reduced to a single rise with metal wind trunks. The pipework and stoplist of this instrument are essentially unchanged, with a couple ranks of spurious pipework or pipework moved to another position, and the majority of the pipework is unaltered and from one source. Low \"C\" of the Trumpet is marked \"1053\" but is definitely not a Hook reed. Likewise, low \"C\" of the 4\' Principal is labeled \"Nashua\" in the hand of the original labeling. The chests and pipework of this instrument are of extremely quality, and ruling out what it isn\'t, leads me to believe this might possibly be a late and rare W.B.D. Simmons, (mid-1870s).

The pipework contains none of the usual identification graffiti typical for Hook instruments, and what is inscribed provides a minimum of information. My conclusion so far leads me to believe three possible scenarios: 1) the church history is wrong regarding the source or maker of the instrument installed in 1911; 2) Laws did a bait and switch, and installed a larger and better instrument in place of the planed-for Hook in 1911; 3) the Hook was in fact installed, but replaced with the present instrument at a later date-- the known dates of intervention being the Laws work ca. 1940, or the Kershaw work ca. 1958. The pitch of the organ is about A446, only slightly lower than standard A450 pitch, and the slotted metal pipes have latitude to go sharper but the open wood pipes do not. The pipework is in excellent condition. Only 10 of the original 20 speaking facade pipes are now in use (1-10 Gr. Open Diapason). The Gr. Dulciana has its own bottom octave on a pneumatic offset chest, but the bass C and C# Dulciana basses in the facade are unused.

The original pallet boxes have been enlarged, and the pneumatic pulldown motors placed internally therein, are activated by an external primary. The facade pipe stenciling is not original and is more recent.

This is a rebuild of an existing organ. Identified by Richard Chonak, using information from this web site: https://www.youtube.com/watch?v=8p1mo5V9-U0.
Information from parish history published in 1959: the organ was installed in St. Stanislaus Church circa 1911. The builder performing the relocation is not known.

The tracker action was replaced in 1950; an electric console, decorative pipes, and some new stops were added. Maas Rowe electronic carillon installed 1957, probably by Rostron Kershaw Company of Lowell, MA. 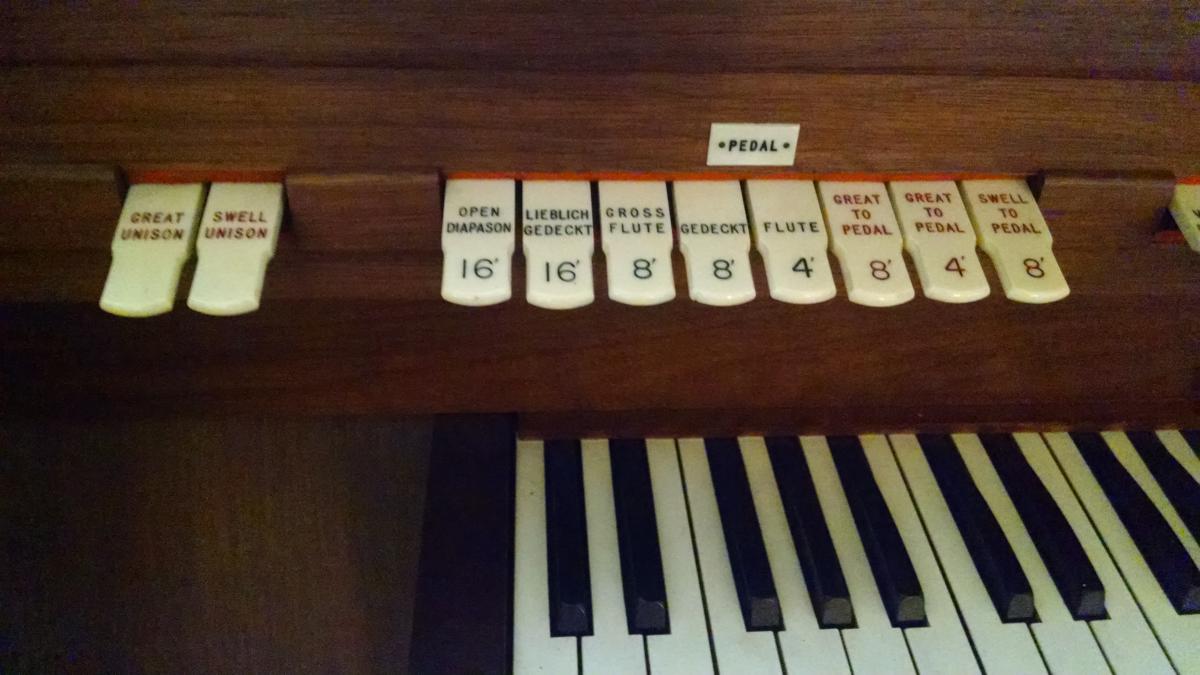 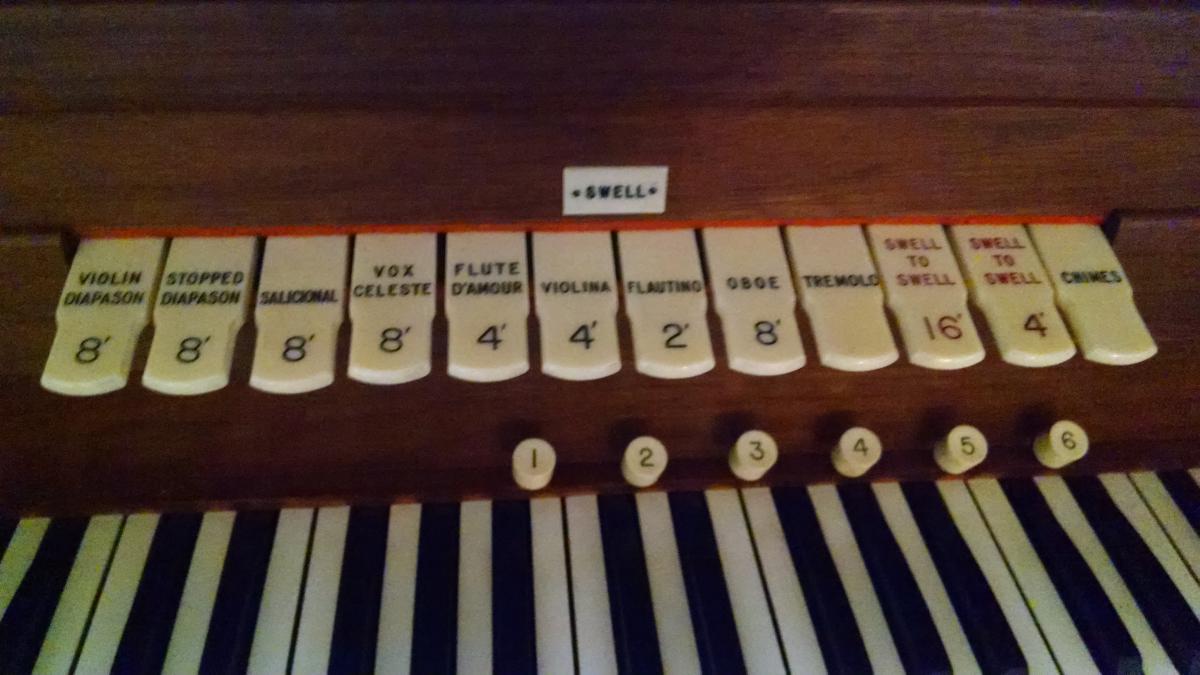 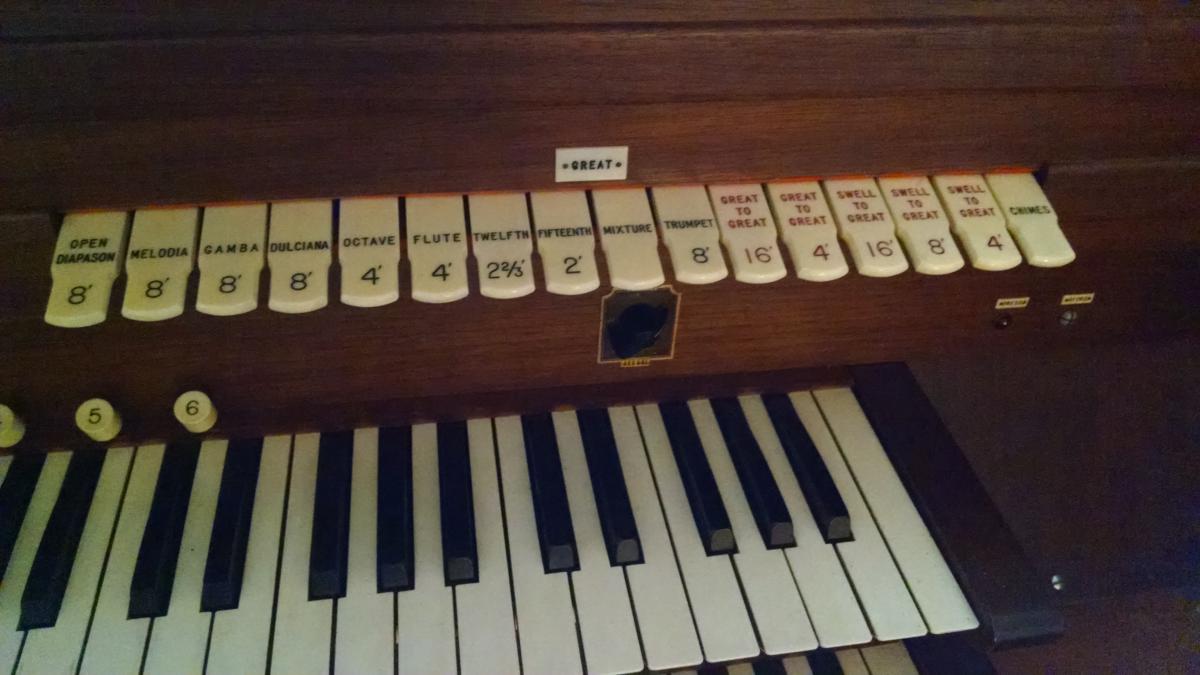 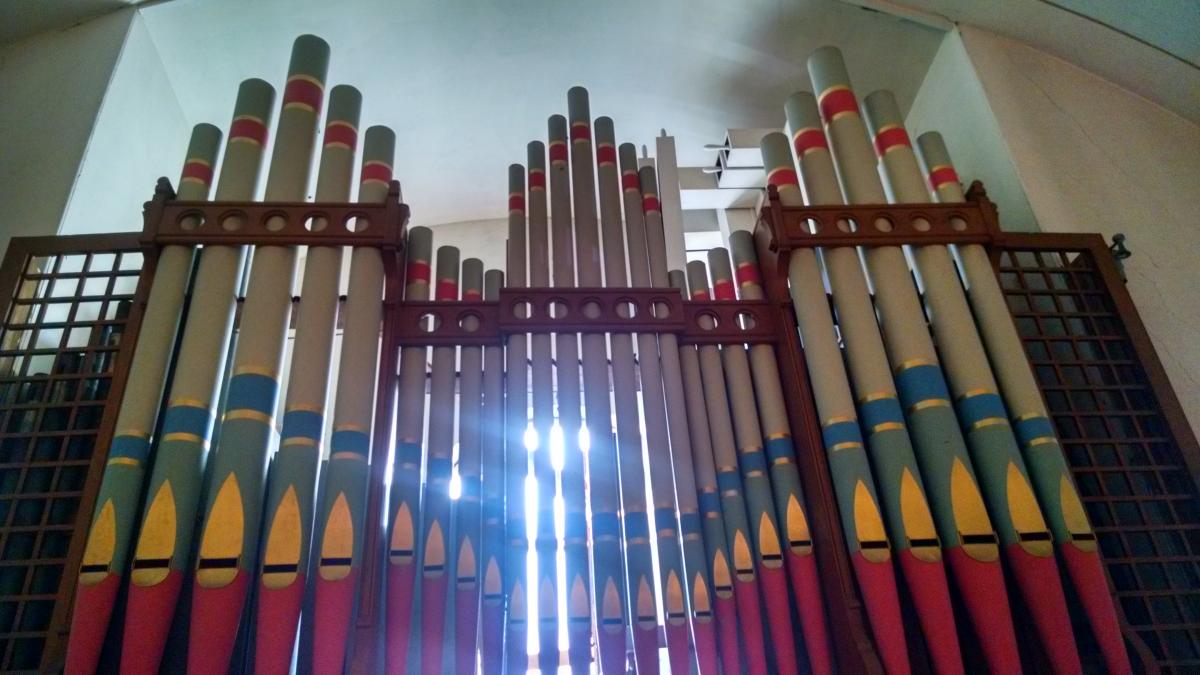 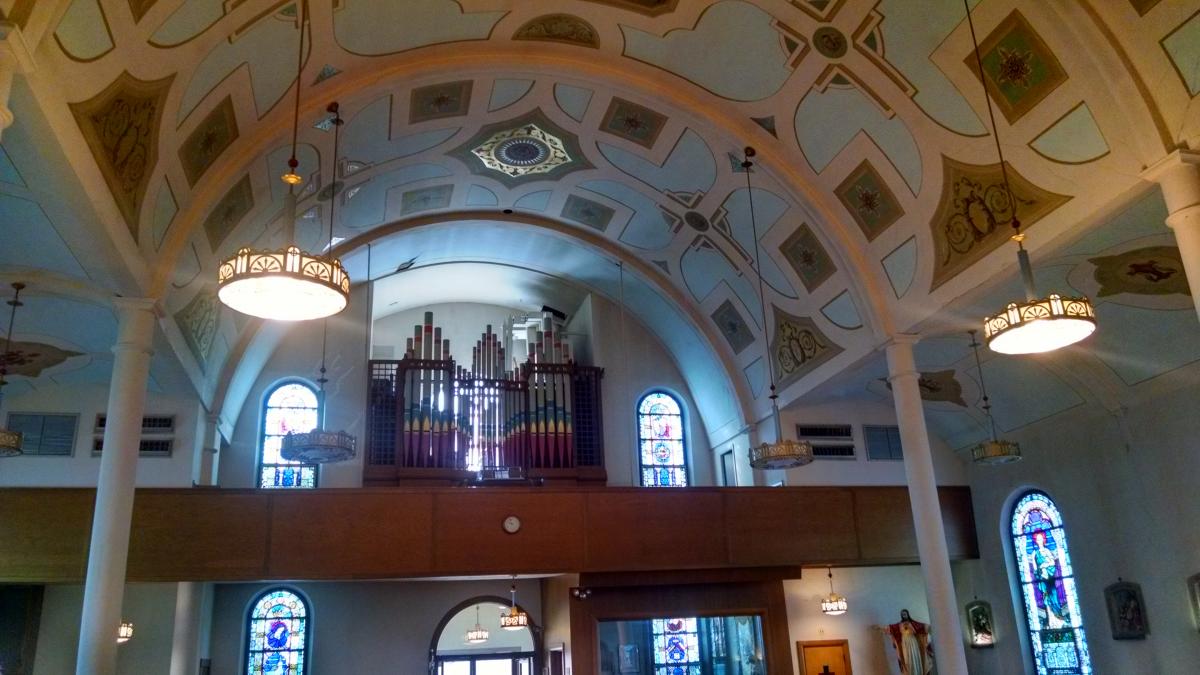 This instrument has been viewed 301 times.