We received the most recent update for this instrument's status from Paul R. Marchesano on October 15, 2021.

The chassis of the Berkshire was Geo. S. Hutchings No. 443, 1897, originally built for First Parish Unitarian Church of Needham, Mass. It was only two organ numbers away from the original 1897 organ built for the Concord Congregationalists, a large two-manual, and undoubtedly the two organs co-existed for at least a brief period in the Hutchings factory. The Needham Hutchings was nomadic, relocated multiple times. By the time the Berkshire Organ Co. relocated the chassis through the Organ Clearing House late in 1984, it was a forlorn pipeless hulk with little extant except the main chassis, manual windchests and keydesk.

The Berkshire replaced a unit Frazee, new to the building ca. 1927-28. The previous building and its Hutchings organ were destroyed by fire in 1926. The choir gallery is above and behind the pulpit, the Frazee was in a chamber on the left speaking into the choir through a grill. The architect designed a sham organ case installed front and center against what was then an outside wall, rather well designed in a way, reminiscent of English and American organs of the late 18th and early 19th centuries. It was flawed with too many facade pipes of narrow string scale and greatly forced length. In 1956 a Sunday School wing was added behind the chancel wall. For the installation of the 1984 Berkshire, a new plaster and lathe chamber was built behind the 1927 facade encroaching into the conference room behind it. A hole was punched through the original outside wall behind the facade for sound egress, and new speaking facade pipes (with too-long pipe feet) were installed in the 1927 casework.

Berkshire was the only builder approached, and owner David Cogswell was an acquaitance of the church organist. The organ was a bargain even in 1984, costing approximately $56,000.00. Reusing a Hutchings tracker chassis (chests modified with in-built Schwimmer wind regulators), which was the best part of the organ, the pipework comprised floor sweepings from a wide variety of mongrel sources, including 3 or 4 ranks recycled from the Frazee and its bass offset chests which became the electric-action pedal division of the Berkshire. The wind system was new with supply-house regulators. Several ranks, like the Great Principal and Swell Gedeckt had pipes from at least 5(!) different sources. The Spencer blower in the cellar from the Frazee was reused as well as its wind delivery pipe. The chamber was rather too small, as a result the organ was unnecessarily cramped and extremely difficult to access and service- two of four pedal chests being completely inaccessible.

The stop action was rebuilt to have a short throw at the knobs to match the throw of the crude homemade pedal electric stopknob action. As a result, the action was extremely difficult to manipulate, and sliders never registered in the same place twice in a row, (unless pulled hard and fast), resulting in mistracking of slider holes and wind starvation of the pipework so ranks were often out of tune. Two stops were prepared for in the Swell, but curiously neither toeboards nor sliders were large enough to accomodate the intended stops.

The organ was revoiced by S.L. Huntington, a college acquaintance of the organist Victoria Wagner, in 1988 on a shoestring budget. Plans thereafter to tonally rebuild it with decent new custom pipework were continually shelved. During renovation work in the area behind and around the organ chamber in the early 2000s, the organ was improperly protected-- the chest, chamber and pipework filled with plaster dust and grit-- the church refusing thereafter to allocate the necessary funds to properly depipe the organ and clean it thoroughly.

The Spencer blower was expertly rebuilt by Joe Sloane LLC to like-new condition ca. 2008. The choir gallery was perpetually too cramped for the size of the choir seated in heavy, over-sized oak chairs and after years of procrastination and debate, the formerly off-limits rear gallery was made available for a new organ and an adequate amount of choir seating. The front choir gallery and Berkshire organ were abandoned, the original architectural facade retained out of sentiment, the Spencer blower was sold, and eventually the Berkshire will be junked and the chamber removed. A new mechanical-action organ was installed in the rebuilt rear gallery in 2016.

At the time of its installation, the new instrument was heavily touted by Berkshire for the "International Nomenclature" on the stopknobs. This consisted of pictoral depictions of the top part of a pipe's general form -- a tapered pipe was a long upside down "V" while the Trumpet was a right side up "V". A chimney flute was a depiction of the chimnied cap, open metal pipes were drawings of the top part of an open metal pipe of various widths from narrow to wide, stopped pipes were large cale with a stopped handle. The Celeste was a narrow metal pipe version with a sine wave drawn over it, and the Tremolo was simply a large sine wave. The Mixture was three principal pipe drawings of three different lengths. The pitch designations were given. These were replaced with normal labels in 1988. The dedication brochure stated the (Great) Erzahler 8' was added by David Cogswell above the contract as his gift to the church.

Typical of Berkshire products, the pipework was excessively chiffy, harsh, and treble prominent, with the pipework cut up low and pushed to the limit. The workmanship was basically competent, the windchests retabled expertly, the layout poorly conceived and seriously cramped, the swell box was insufficiently out of a single thickness of plywood with a too-small opening and thin 3/4" shades, but the mongrel pipework was beyond the pale.

We received the most recent update for this note from Scot Huntington on October 16, 2021.
Database Manager on October 30, 2004:

We received the most recent update for this note from Jim Stettner on October 15, 2021.
Database Manager on October 30, 2004:

We received the most recent update for this note from Jim Stettner on October 15, 2021.

From the dedication brochure, : Open In New Tab Interpreting the "International Nomenclature", and giving the majority source each rank. Originally published 1985
We received the most recent update for this stoplist from Scot Huntington on October 16, 2021. 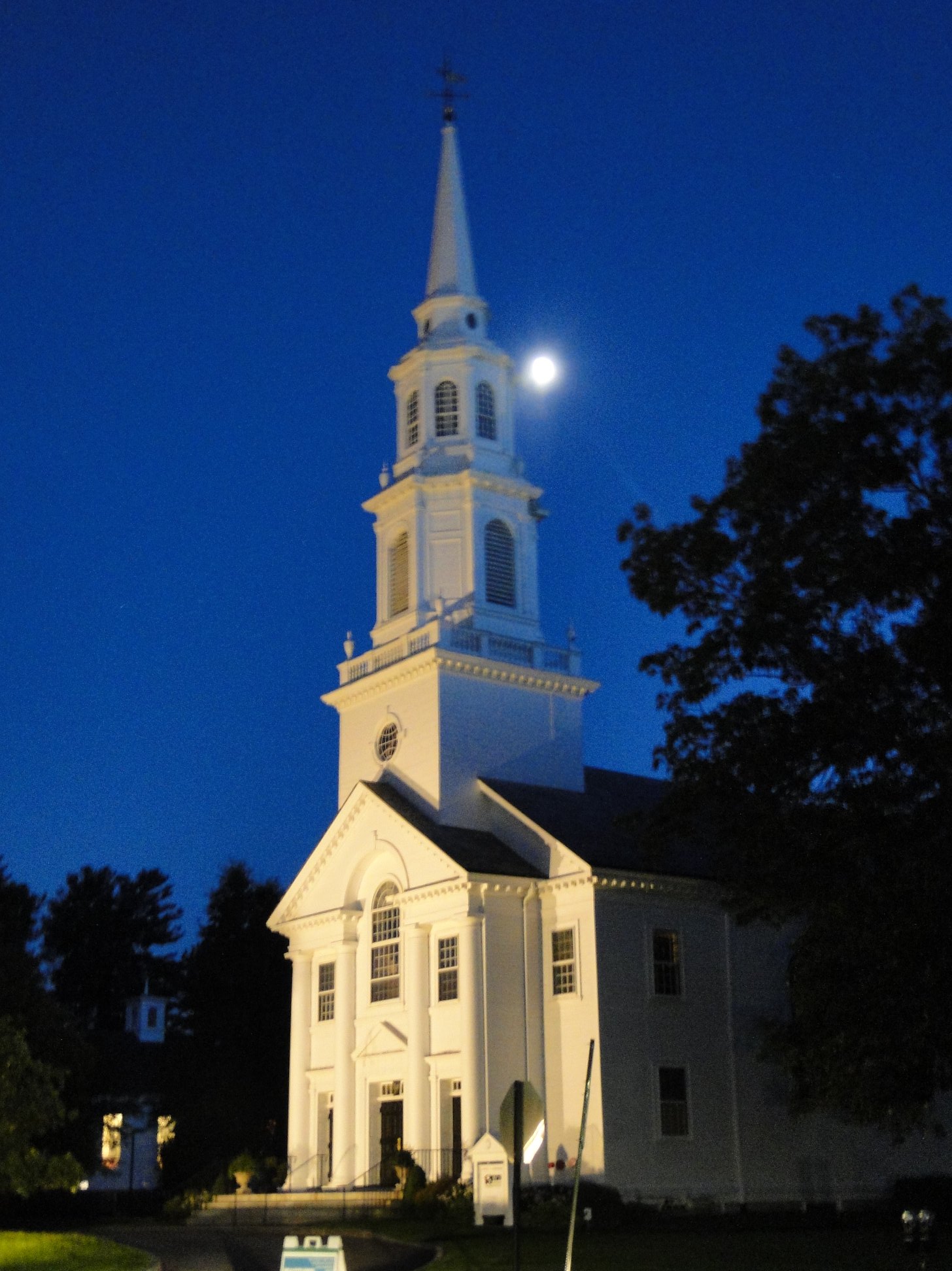 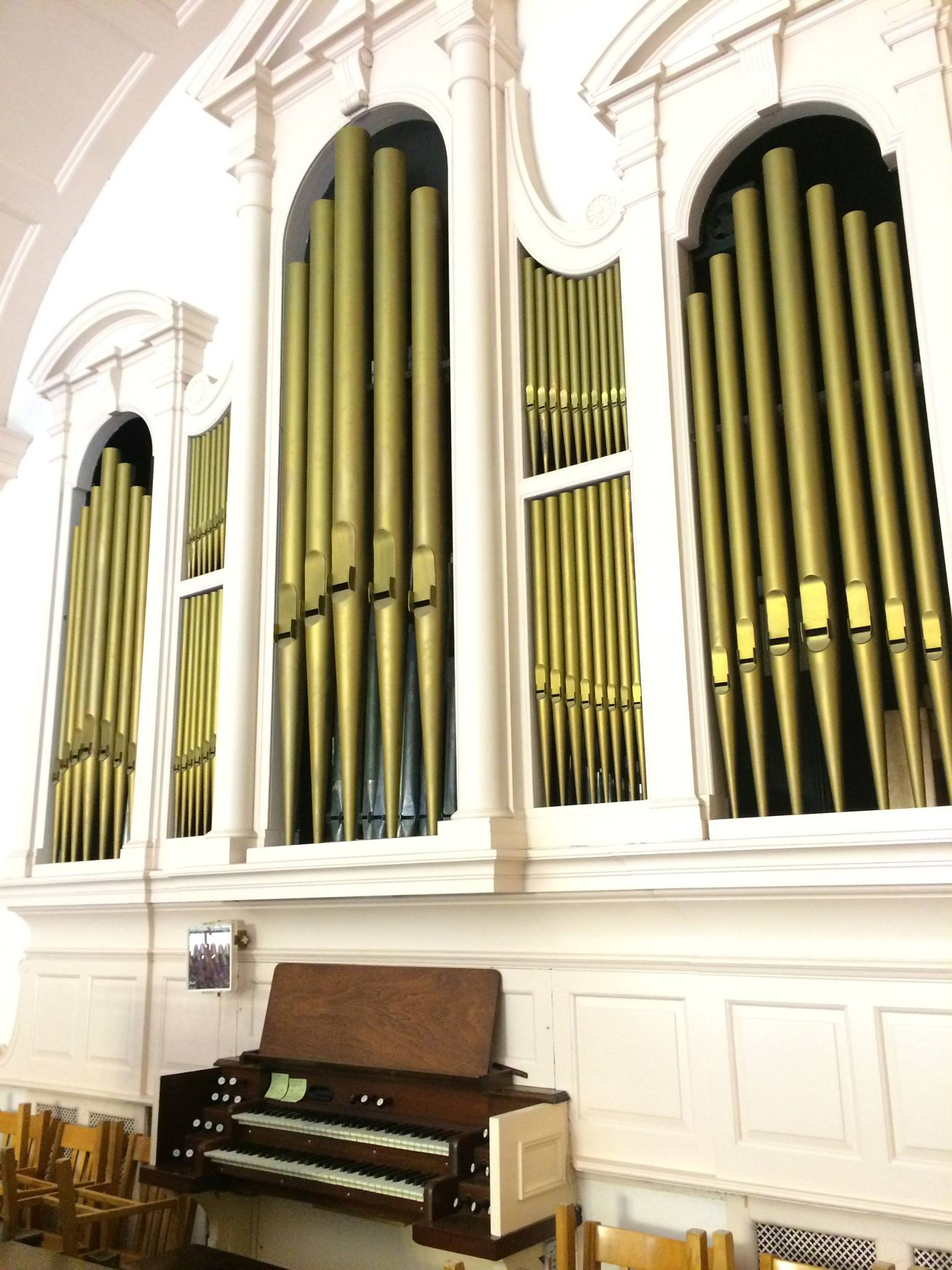 Pipe Organs in Massachusetts sponsored by:

This instrument has been viewed 260 times.