We received the most recent update for this instrument's status from Paul R. Marchesano on March 21, 2022.

Antiphonal, Antiphonal Pedal: We received the most recent update for this division from Paul R. Marchesano on March 22, 2022.

Gallery: We received the most recent update for this console from Paul R. Marchesano on March 22, 2022.

With the Kimball restoration under way, the task force continued to consider options in the gallery...Some of America’s finest builders put forth many intriguing possibilities, but what really captured the task force’s attention was news of a cache of 1899 Kimball pipework that had become available in Pittsburgh. Going on faith, Zamberlan and Spencer crews retrieved these pipes...In the end, Joe Zamberlan designed the Denver cases and organ afresh...

Stephen Tappe had clear expectations for the Antiphonal. Naturally, it should aid congregational leadership, but also contain sufficient material to support the choir from the gallery. Finally, it should provide a few key effects the chancel organ lacked: soft 32′ and heraldic manual reed. Most of the Antiphonal pipes come from the Pittsburgh Kimball, which, it must be admitted, hails from a different aesthetic than the chancel organ. These pipes are voiced on 3¼” wind pressure and reflect a late 19th-century approach to construction and voicing. As Kimball’s pipe shop was in its infancy in 1899, some of the Pittsburgh pipes came from suppliers. The tin strings from G. Mack (a former Roosevelt pipemaker) are incisive in timbre yet delicate in strength. The diapasons resemble those of Carl Barckhoff, with healthy windways and slightly arched cutups. The Kimball-built, sprightly-toned stopped wood flutes recall Woodberry or Johnson, as do the thin, blending Trumpet and Oboe. Non-1899 registers are the Great Gemshorn (a fine Tom Anderson rank salvaged from another Spencer restoration) and new pipes from A.R. Schopp’s Sons. Schopp voicer Bob Beck did excellent work on the prompt facade Diapason, Violone, and 32′ Bourdon. For the Tuba, we turned to the magical touch of Christopher Broome. Scaled on the Skinner pattern and hooded from tenor F-sharp, the Tuba has a darker tone in deference to the chancel organ.

The Spencer and Zamberlan shops collaborated actively. The two Josephs co-designed the layout, windchest style, and wind system. Cases, structure, windchest parts, reservoirs, and blower cabinets were built at Zamberlan’s. The Spencer shop leathered the windchests and completed them with restored pipes, racking and testing. Everything was returned to Ohio for setup, and then sent on to Denver for installation. Jonathan Ambrosino helped with concept and tonal design, and did voicing work on flue pipes and the Vox Humana, which Martin Near, once again, put into beautiful condition. Sam Hughes reconditioned the Trumpet and Oboe. Spencer renovated a 1952 two-manual Aeolian-Skinner console with new tablets, expression shoes, and pistons. Houghten and Vaculik returned to update the entire organ to MultiSystem II, while SSOS provided a special touch-screen portal that permits the setting of chancel generals at the Antiphonal console without having to run downstairs.

We received the most recent update for this note from Paul R. Marchesano on March 21, 2022.

St. John's Cathedral Organ Specification: Open In New Tab
We received the most recent update for this stoplist from Paul R. Marchesano on March 22, 2022.

St. John's Cathedral Organ Specification: Open In New Tab Specification of the restored Kimball organ and the new Gallery Antiphonal organ.
Document created on 2017-07-01
We received the most recent update for this document from Paul R. Marchesano on March 21, 2022. 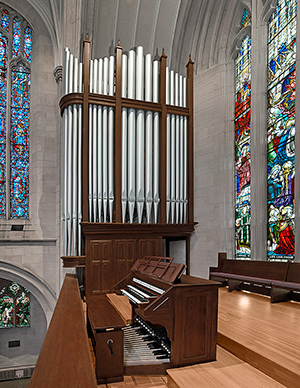 This instrument has been viewed 513 times.