We received the most recent update for this instrument's status from Preston Miller on August 06, 2022.

Main: We received the most recent update for this console from Preston Miller on August 06, 2022.

Grace St. Paul Church Organ In 1996, Pipe Organ Artisans of Arizona, Inc., Carl Anderson, and Grahame Davis mapped out a tonal plan using most of the older pipes, and adding new accompaniment voices, mixtures, and chorus reeds, for a total of 58 ranks. Older reeds were restored and re-voiced with slightly higher wind pressure to better carry the sound from the deep organ chambers, and the entire organ was provided with new slider chests."

We received the most recent update for this note from Preston Miller on August 06, 2022. 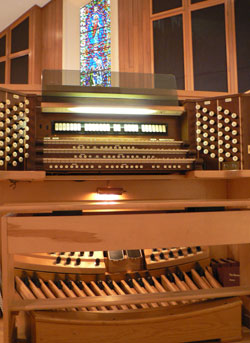 This instrument has been viewed 114 times.